My thoughts, my poems, my passions.

There once was a Man Named King

Some his praises they sing

But the babies just cried,

The mothers were fried

And it passed* as another Fad Thing.

*Only….there are still some who would have you follow the Truby King ways.  This outdated method of baby care has influenced many of the ‘great’ baby training methods being peddled today.  Like the snake oil of yesteryear, these methods promise to fix problems they tell you that you have.  Step one: Create Problem.  Step two: Sell the ‘Solution’.  And there is no shortage of desperate customers.  The sleep training and overly prescriptive methods appeal to modern families, who need to maintain their busyness and not be inconvenienced by things that take time.  (recommended reading: Clementine Ford needs our support, to look at current Mothering)

Back to the 50s, the prescriptive methods did not allow flexibility for a mother to trust her instincts. When I first became a mother, my grandmother would not call at 10am.  That was bath time.  She mothered according to Truby King, as most mothers of her era did.  Dutifully attending the clinic, and doing exactly as she was told, even though it was not working for her or her baby.

She does not remember this time fondly.

One of the key features of the Truby King method was The Plunket Clock:

The Plunket Clock was followed to the letter by the 1950s mothers, who were under pressure to be well groomed, with tidy homes, dinner on the table and were beholden to The Husband.  In Australia, women’s rights were at the point where the Married Women (Lecturer’s and Teachers) Act (NSW) had been repealed (in 1947) but most women still ‘did the right thing’ and resigned their jobs once married (it would be 1966 before the bar on employment of married women as permanent employees in the Commonwealth Public Service lifted).  Women who worked received 75% of the male wage (good times..it was 54% before 1950).  It would be the 70s before ‘childcare’ became a thing.  There was no Pill.  No right to say NO (it was 1976 before rape in marriage became a criminal offence and 1975 before ‘no fault’ divorce was possible).  Change was happening, but traditions were firm.  Schools were still promoting how to be a good wife (I remember being shown an old textbook with this ‘advice’ when I was in high school in the 1990’s and my mother confirming it had indeed been part of her instruction at school – in the 60s!):

In my next post, we will look back to the 60’s, The Pill arrives, change is in the air…and the coming of Spock. and following that we head into The 70s with the Continuum Concept.

It gives me such a buzz to know you appreciate what I write.

I mostly talk about:

The Best Birth Plan – is a Birth Map 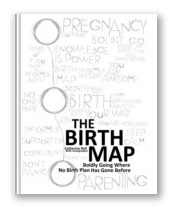